125 species of birds have been recorded at Treborth which is wonderfully situated along a migration route (the Menai Strait) and includes varied woodland, parkland and grassland. 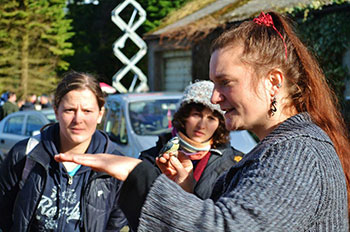 43 species are resident and breed on site, including:

The presence of such variety provides students with plenty of opportunity to compare and research many aspects of bird behaviour especially foraging techniques.

Regular migrants which breed at Treborth include:

On the Menai Strait

Three species of tern use the adjacent Menai Strait in summer and Common and Arctic Terns breed in small numbers on some of the islands there.

In winter good numbers and variety of waders and wildfowl gather along the shoreline and in the open waters of the Swellies including:

These in turn attract Peregrine Falcon which breeds on the Britannia Bridge some years.

Redwing populate the garden in large numbers in winter along with Blackbirds and Song Thrushes from eastern Europe and Fenno-Scandinavia.