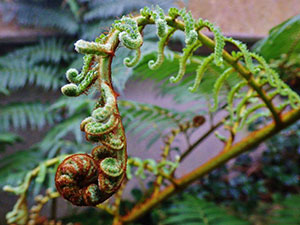 Not many visitors to Treborth are aware that hidden within thick damp woodland less than two hundred metres north of the rhizotron lies an incipient ‘bog garden’. It occupies an area some 20 metres by 30 metres on spring-soaked ground which slopes gently north.

Many years ago, possibly during Joseph Paxton’s ground breaking efforts to create Britannia Park in 1850, metre-deep drainage ditches were dug which now surround the site in a thoroughly choked state permitting a year round swampiness.

The largest addition to the fern collection in the Bog Garden has come in the 4 m high form of another tree fern, Cyathea medullaris, the Silver Sword Fern, New Zealand’s proud emblem.

A team of 4-6 students excavated this specimen from the Temperate House and relocated it in the north-western corner of the Bog Garden. Nearby they have planted a specimen of Todea barbara, a fine clump fronded member of the Royal Fern family, Osmundaceae, 10 years old, one of the oldest unchanged plant families left alive with an ancestry that goes back to the Permian, 275 million years ago.

The various ditch banks provide slightly drier anchorage points for several species of Pteris, Asplenium, Cyrtomium and Woodwardia ferns. Over the winter the canopy of birch and elm above the Bog Garden will be thinned carefully and invasive Rhododendron ponticum checked. Further excavation of ditches should reveal the true extent of the original earth works hereabouts with the prospect of revealing an attractive and historically quite interesting feature