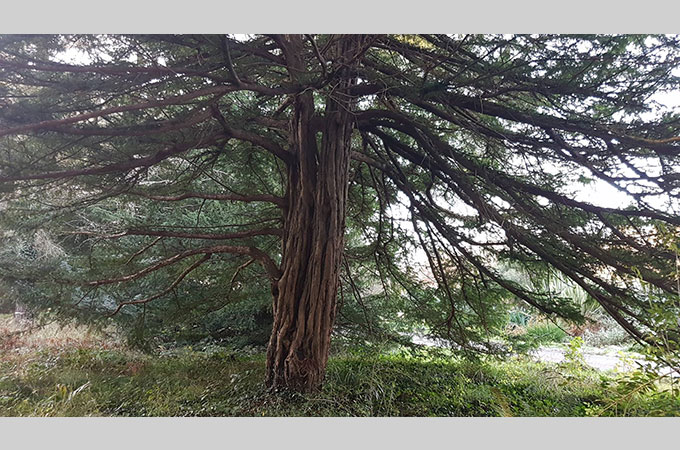 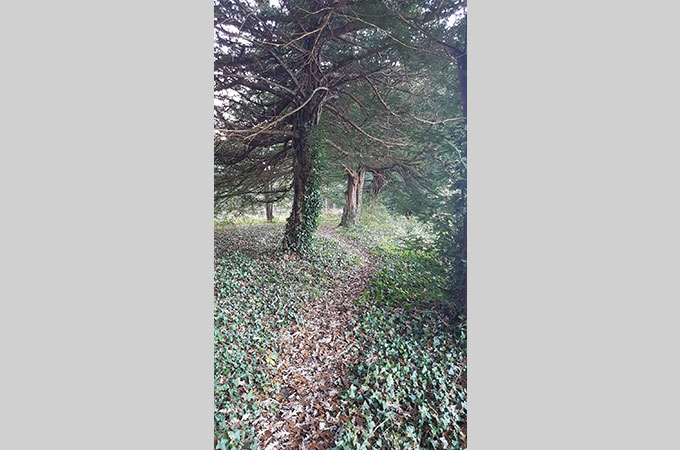 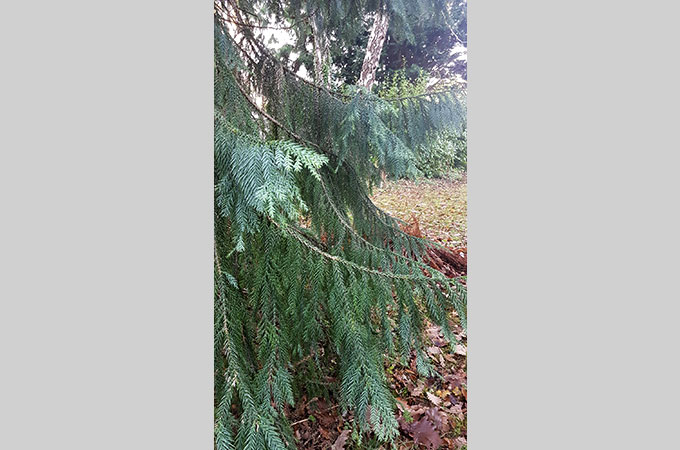 "The Arboretum" is the strip of woodland stretching from the entry gate (by the Lodge) to the glasshouses, between road and railway line.  Until recently it was a rather neglected area, having accumulated many self-sown trees and shrubs, including willows, birches, and sycamores, together with invasive bamboo, cherry laurel and rhododendron.  But over the past few years it has been considerably opened up, beginning with the construction of the coastal footpath (which runs through the eastern half of it), and continued through the valiant efforts of Gerry Downing and many volunteer students, together with the University Estates input on some larger trees. That has created fine vistas, exposing rugged tree trunks and attractive woodland glades.
Further changes have resulted from recent storms which uprooted or broke quite a number of specimen trees in the arboretum.  Sadly the fine Incense Cedar (Calocedrus decurrens) has gone, broken by the recent storms, together with a huge branch from the biggest ash (Fraxinus excelsior) leaving the tree so badly damaged it will probably have to be felled, but in the main the casualties were trees that were decrepit and due to be felled anyway.

As many people will know, we propose to create a “Time-line” in the arboretum, to show the changing tree-scape of Wales. It will include most of the commoner tree species found in Wales, showing when each species arrived, and why it is here.  We aim to label a specimen of each species with its name (in Welsh, English and Latin) and an indication of when it appeared (e.g. post- glacial immigrants, mediaeval introductions, nineteenth century introductions for timber, etc.). We hope this will be supplemented by an explanatory leaflet, with further information available on the website.

The present arboretum includes several unusual and attractive specimen trees (such as the coffin tree (Taiwania cryptomerioides), the sawtooth oak (Quercus acutissima), and Hungarian oak (Quercus frainetto) amongst others), together with some fine Douglas fir (Pseudotsuga menziesii ), spruces (Picea spp.), and yews (Taxus baccata).  These will of course be retained, but supplemented by planting in the newly opened glades.   This is likely to be a long term project, planting in stages over a number of years, as money and labour allow.

During autumn 2015 to spring 2016 we planted a selection of trees that were introduced by the Romans, including walnuts, mulberry and wild pear in the area where the bamboo was (east of the coastal path car park).   Where possible we try to acquire Welsh provenances of each species.

Another item on our wish-list for the arboretum is to add more diversity and colour to the spring-flowering herb layer, including bluebells, snowdrops, daffodils, wood anemones and primroses. Again, we aim to plant wild-type species rather than garden varieties, e.g. the true native bluebell, wild snowdrops, the true wild daffodils (though maybe we might stretch as far as the Tenby daffodil!) as distinct from larger, gaudier garden strains.