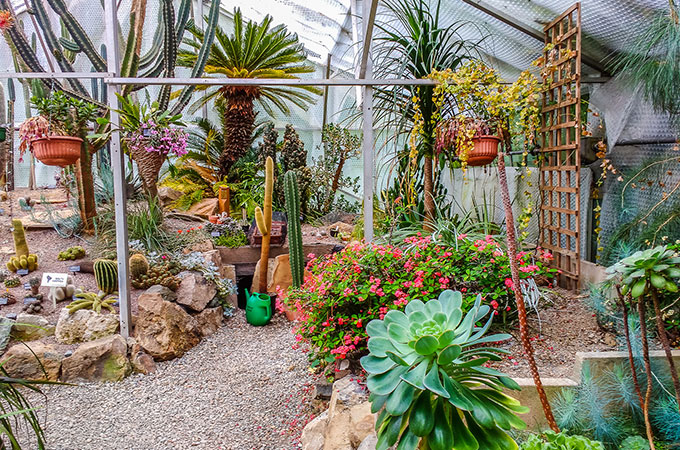 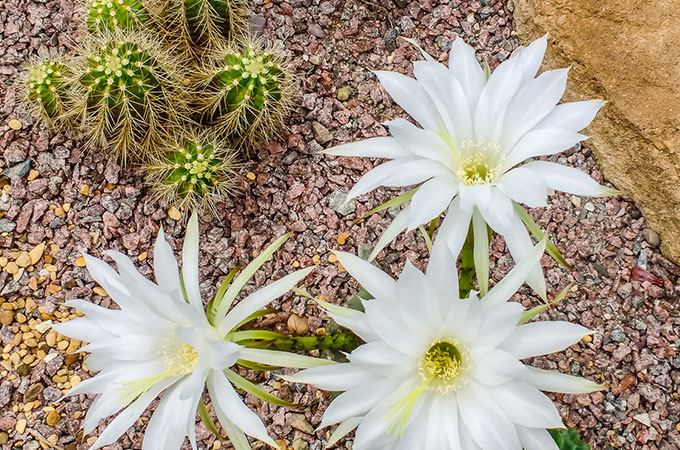 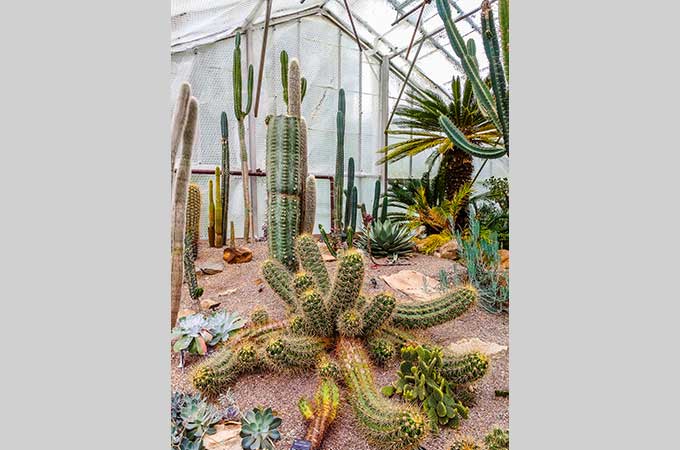 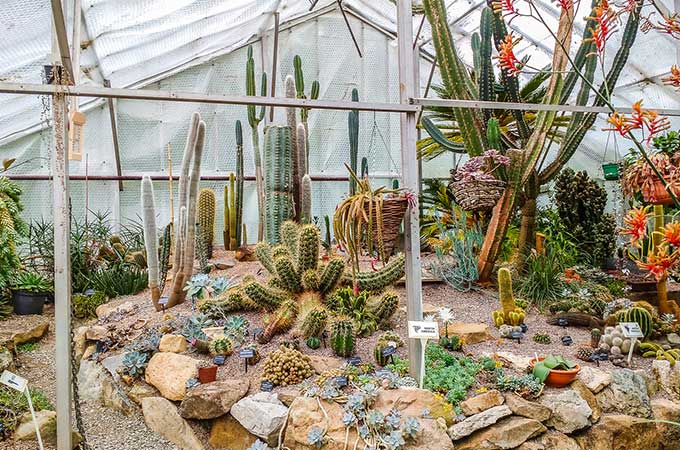 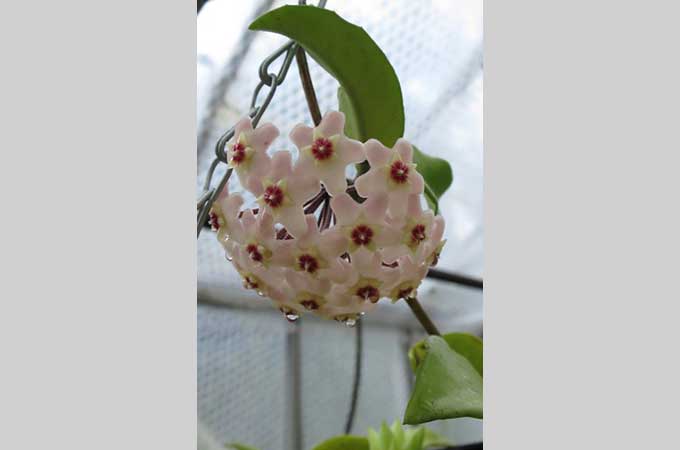 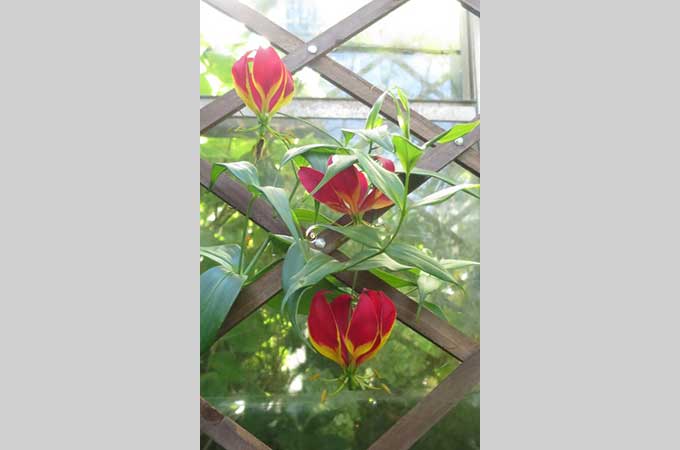 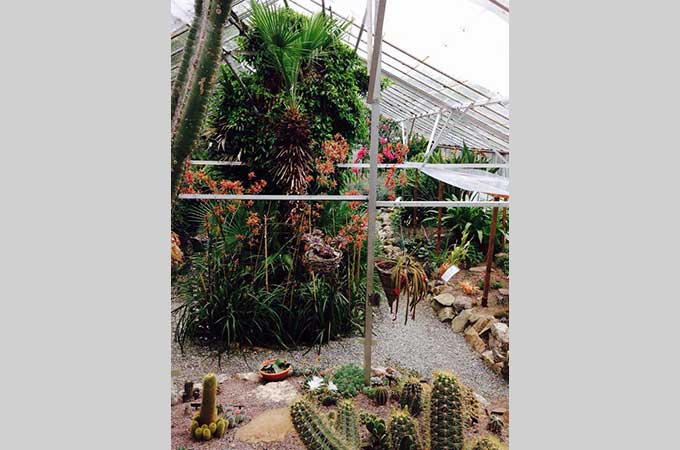 Our collection of Temperate House plants include many exotic and unusual species from the temperate regions that span Africa, Australia, New Zealand, Asia and the Pacific Islands.

Highlights of the glasshouse include the Cacti and Succulent Collection, with species that are adapted to cope with very high daytime temperature and low water supplies and the Southern African Bulb Collection that rely on the heavy winter rainfall of the Cape (May-July).

The Temperate House also provides a representation of endemism, particularly from the Island of Tenerife in the Canary Islands. Due to the volcanic origin of the island, many of the plants have developed in isolation from the mainland, leading to a high degree of endemism. Each year, students from Bangor descend on the island to study the flora, fauna and soils. Some characteristic plants you may see in the bed are Canary Island pine (Pinus canariensis), house leeks (Aeonium sp.), Canary bell flower (Canarina canariensis) and wormwood (Artemisia canariensis).

Come and visit the Temperate House to enjoy the variety of colour from our fantastic specimens of bird of paradise flower (Strelitzia reginae), bright pink Bougainvillea, the tubular orange flowers of the marmalade bush (Streptosolen jamesonii) and also see species of tree ferns, orchids and palms.

A Mound of Cacti (and other succulents)

A few definitions before we start. Cacti (singular: cactus) are members of the family Cactaceae – most of which are succulent and native to the Americas. Succulence refers to high water content and volume, but small surface area – in its most extreme form exemplified by the spherical bodies of Euphorbia obesa. This broad definition would encompass bulbs, orchids and succulent halophytes (including the Salicornia of our local salt marshes), but in this context is used for an ill-defined group of fleshy xerophytes. Although distinctions are not always clear, some broad groups can be recognised. Leaf succulents have varying amounts of water in their leaves, ranging from relatively little in some species of Yucca and Agave, to something very close to the ideal spherical succulent in some members of the Aizoaceae. Lithops (“Living Stones”) are not the best examples of these, but are perhaps the most familiar. Stem succulents (for example, most cacti) have enlarged, green, photosynthesising stems and few (if any) leaves. Pachycauls also have enlarged stems, but these are mainly for storage of water and nutrients. They are usually brown and non-photosynthesising. Photosynthesis is normally performed by non-succulent leaves carried on (±) deciduous stems. An example is the “Elephant’s Foot” (Dioscorea (Testudinaria) elephantipes – a South African yam from the same family as our black bryony, Tamus communis) in the right-hand bed (as viewed from the door) of the Temperate House – but compare this with the nearby Bowiea volubilis – an above-ground bulb with a photosynthesising inflorescence.

History of the Collection

The succulent collection was established at Treborth in the mid-1970s. Various collections and odd plants were added over the years. In 1977 the raised arid bed was created – complete with the Cycas revoluta from the distinctly non-arid (it rained quite a lot when we were there!) Japanese island of Kyushu.

The extended cactus and succulent mound was constructed in the spring of 2008 using recycled compost (1:1 John Innes No. 1 and coarse sand) from an experiment at Pen-y-Ffridd Research Station on drought tolerance of chickpeas from Pakistan.
The cactus and succulent beds in the Temperate House are ranged geographically, starting on the left with African succulents, including those from Lesotho (in the far left corner). Moving right, we come to the North American species. Most of the cacti in the original cactus bed near the back of the Temperate House were too big to move. Many of them are from South America. Smaller South American species are on the right of the main bed. The bed on the right is the exception to this geographic arrangement and is mainly for species that like partial shade.

Some cacti and succulents are confined to very small geographic areas – in some cases just one hillside – and are therefore at risk from habitat destruction, overgrazing and removal from habitat by private and commercial collectors. In an attempt to reduce the latter problem, the international trade in cactus plants (but not seeds, except for cactus seeds collected in Mexico) is limited by CITES, the Convention on International Trade in Endangered Species.

This does not directly affect (or reflect) the availability of these species withinthe U.K. or other countries, nor does it reduce the first two problems. All species of cacti, aloes, succulent Euphorbias, cycads and orchids fall within appendix II of CITES, while some are in the more endangered category of appendix I. International movement of these is restricted to non-commercial (scientific and conservation) reasons and requires specific import and export licences.

The Mexican Government has imposed even tighter restrictions on the movement of its native cacti, to the extent that ex-situ conservation of some species in botanic gardens has been made more difficult. A number of species that are now common in cultivation have been ‘lost’ in the wild, and cultivated plants could be used to reintroduce them to their natural habitats – if those habitats could be protected.

There is a dilemma in that the demand for rare and newly-discovered species threatens survival in the wild, but tissue culture and commercial propagation may offer the best hope for the long term survival of some species. An example is the spiral aloe, Aloe polyphylla, from Lesotho. The seedlings of A. polyphylla at Treborth is an important resource and should in time generate new seeds.