More about the Gardens

Our mission is to further the conservation, sustainable use and enjoyment of plants and the natural world through education, research, training and community engagement.

History of the Garden 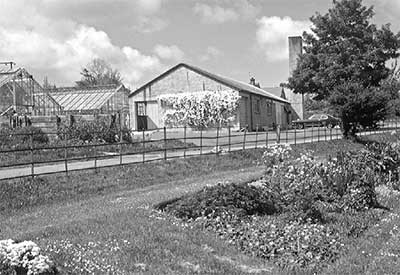 The 90 acre site of the Garden formed part of the Treborth Isaf estate until 1846 when it was purchase for £18,000 by the Chester and Holyhead Railway whose Chief Engineer was Robert Stevenson, son of George Stevenson. The railway required so much land because it needed to tip spoil from its tunnelling at Bangor station and had to approach the Britannia Bridge at a right angle to the bank and therefore had to move away from the banks of the Strait in a gentle curve.

On completion of the bridge the company found themselves the owners of at least 80 acres of surplus land. Joseph Paxton, who designed Birkenhead Park, was associated with the company and may have suggested that they create a resort similar to a continental Spa. He produced a design, based on Birkenhead Park, which consisted of pleasure grounds (areas for walking, plants and recreation.), housing, and most surprisingly a 500 bed hotel. The architect for the hotel was Charles Reed who had designed Rhianva on the Strait. The company decided to use Paxton’s design calling the development Britannia Park and work started in March 1851 but as the company was in financial difficulties work stopped in September 1851. Some work was carried out on the hotel, the east wing being located on the site of the new dipping pond but there are no signs of this. The only significant construction now visible is the drainage tunnel that feeds the cascade. 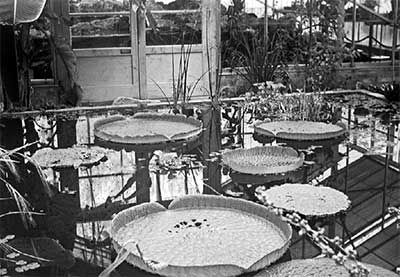 In 1858 the railway company built Menai Bridge Station on the site above the present industrial estate at the Garden’s entrance having obtained access over the Crown Land at the south end of the suspension bridge.

At Easter 1865 it was proposed that horse racing and games should take place near ‘The Britannia Park Refreshment Rooms’ which was probably near the tubular bridge but the company refused permission. That area appears to be fated to be used for games!

In 1867 Treborth Isaf was purchased by Richard Davies MP who later purchased Britannia Park, built the bridge across the Railway and the Lodge at the entrance. The Park area was again part of the estate after just over 20 years.

In the 1890s the house Ceris was built by Richard Davies for his son John Robert Davies. The house was built close to the suspension bridge and the Strait. The owners closed the 16 footpath which runs along the edge of the Strait depriving the fishermen of Ynys Gorad Goch of access to the railway station via the Pilot’s Steps just west of the end of the paved footpath. The fishermen then had to obtain access via the north bank of the Strait through Coed Môr wood. To ensure privacy J R Davies purchased the island in 1915. Ynys Gorad Goch was famous for its fish teas at one time. During both wars some of the Park was probably ploughed and there are signs of possible military trenches in the woodland.

In 1953 the training ship ‘Conway’ was being moved down the Strait for refurbishment at Liverpool when it went aground east of the cascade near the two mounds which probably formed part of the Paxton works. Parts of the ship are littered on the ground. After the removal of the ship it was proposed that this area of the site should be used for chalet-style second homes and two local people bought the site to forestall this plan. We were fortunate that the railway company’s scheme did not go ahead. ‘The Park’ aspect of the scheme would have been very, very limited and would probably have been destroyed by later owners’ attempts to make it pay and the hotel could never have been successful because at this time both the local Coaching Inns (Penrhyn Arms (130 beds) and The George) were failing. As it is we have a good site for a botanic garden, a very nice drainage tunnel, some well drained paths considering they are 150 years old, the kudos of being associated with Stevenson and Paxton and the ancient woodland was not cut down for housing.

Thank you to Brian Hyde for putting this together as a newsletter article for the Friends of Treborth – with help from Prof. M.L. Clarke ‘Transactions of Caerns. Hist. Soc., Vol.19 1958.’ pp 54- 60. and David Senegles ‘ Story of Ynys Gorad Goch in the Menai Straits’ Private pub. March 1969.