Every night of the year the Treborth BG “Robinson” moth trap is put outside, then the following day all the moths caught are recorded and released unharmed. Records were begun in 1986/87, stopped for a while, and then have been continuous from 1993 to the present, with only a few short breaks. This lengthy and meticulously maintained resource is unique for North Wales, and must be amongst the most comprehensive in the United Kingdom. All these records have now been put onto an Excel database, so are ready for scientific analysis.

Since 1986, a grand total of over 321,000 individuals of 400 species of macromoths have been recorded, plus 71 species of micromoths. Large yellow underwings are sometimes present in immense numbers with a total of 50,600 (560 of them caught on the single night of 31st July/1 st August 1995, and almost as many of them on several other days). The heart &; dart moth is the second most numerous species (totalling 26,300).

Some clear trends are emerging: some species have increased over the years, while others have declined. Species such as dingy footman, august thorn, and yellow tail were rarely seen at Treborth before 2000, but are now caught in large numbers. Conversely, a few species which were found in abundance in earlier years, are now scarce: rustic shoulder knot and treble bar for example, both present in considerable numbers in 1986, decreased over the next few years, and have not been recorded at all since 2005. Many other species (such as large yellow underwing, heart &; dart, common quaker and common marbled carpet) have peak and trough years, but no clear trend.

As daily meteorological records are also kept at TBG, the daily, monthly, or yearly variations in moth records can be compared with climatic fluctuations: this remains to be done. Indeed, all these records have enormous potential for scientific analyses and interpretation. 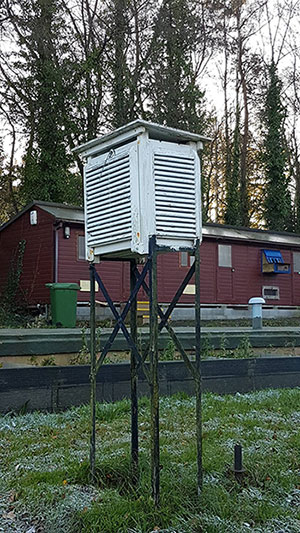 Blame It on the Weather Man

We describe weather as the atmospheric conditions we experience in one place at one point in time. This informs us of the climate, which is the averaging out of the weather conditions over a period of years. This can indicate the type of weather you might experience in a certain month/season.

We record the weather here at Treborth every morning at 9am, taking note of the date, rain (mm) from the day before, wind direction and force, dry bulb temperature (that is the temperature at 9am that day) and the maximum and minimum temperatures for the day before.

It is recorded by hand, and then data is currently being inputted to a meteorological database for public access.