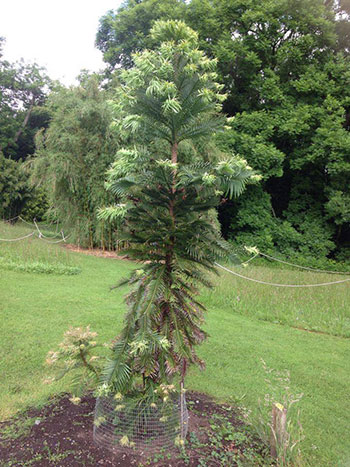 Wollemia nobilis is of exceptional botanical interest as it was only discovered, new to science, in S.E.Australia in 1994.   It represents a hitherto unknown genus with direct evolutionary links to the Monkey Puzzle (Araucaria auracana), Norfolk Island Pine (Araucaria heterophylla) as well as Kauri Pine (Agathis australis).
Added to this is the remarkable similarity shared by Wollemia and some well-preserved fossil foliage of conifers which grew in several parts of the Southern Hemisphere 90 million years ago and previously believed to have gone extinct 2 million years ago, making Wollemia a so called ‘Living Fossil.’
The Wollemia at Treborth was planted in 2007 by naturalist and Honorary Fellow of Bangor University, Iolo Williams and is situated just beyond the rock garden in an open site. 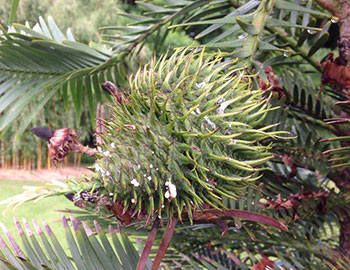 A shrubby tree from exposed mountain slopes from S.W. Cape to Limpopo River, it is rare in the wild, and seldom seen in gardens. It was a gift from Glasnevin, and is a commemoration tree. Hardy only in the west of the UK, this species belongs to the Cupressaceae, has scale leaves typical of that family, a xerophytic feature, as appropriate to its seasonally dry native area. Its bushy form is typical of the species and it produces a profuse crop of female cones, which are attractive, hard and leathery: the male cones are far smaller. Unlike other members of its genus, this species is capable of coppicing and resprouts after fire. Come and see the Widdringtonia opposite the Southern African border down on the main lawn. 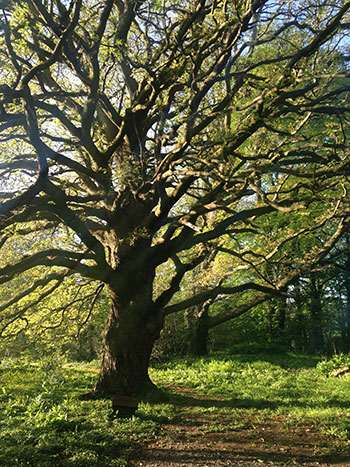 We have two specimens at Treborth, believed to have been planted by Sir Joseph Paxton, a leading Victorian landscape designer as part of his Britannia Park plans.

Lurking at the back of the Tropical House grows a beautiful but sinister plant that constricts its victims, while growing up into the canopy to compete for their light. Ficus aurea, the strangler fig is a tree from the Moraceae family that starts its life as an epiphytic seedling. As it grows in a crevice of its host (usually another tropical tree species), it sends down aerial roots that eventually make contact and establish in the ground. With terrestrial roots, it can now enlarge and engulf its host, competing with it for nutrients, water and light. It effectively girdles its host and kills it. The resulting Ficus is a large hollow tree with a strong lattice trunk.

Another remarkable phenomenon associated with the genus Ficus, is their obligate mutualism (relationship) with fig wasps. Fig species are only pollinated by fig wasps and fig wasps can only pollinate fig species. The thick flesh inside a fig that we love to eat, is in fact the pollinated female flowers. So a fig is a fruit with flowers inside it! F. aurea have both male and female flowers within the syconium (the fruit). Female flowers mature first and produce a chemical attractant that attracts female wasps. These wasps squeeze their way through a small hole into the interior of the syconium, and once inside they pollinate the flowers, lay their eggs in some of them, and then die.

The eggs hatch and the larvae parasitise the flowers in which they were laid. After four to seven weeks (in F. aurea), the adult wasps emerge. These wasps mate, and cut exit holes through the walls of the fig. The male flowers mature around the same time as the female wasps emerge. The newly emerged female wasps actively pack their bodies with pollen from the male flowers before leaving through the exit holes the males have cut and fly off to find a syconium in which to lay their eggs. Over the next one to five days, figs ripen.

Our strangler fig was introduced to the Tropical House in 1979, and has colonised the furthest end, sending large finger-like aerial roots into the pond below. It is a magnificent specimen but requires regular severe pruning to stop it from smothering everything else! 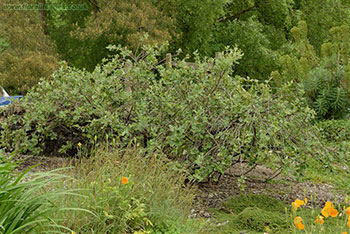