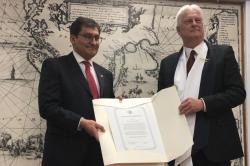 UMAG is located in the city of Punta Arenas on the Straits of Magellan in southern Chile. Dr Russell has been conducting botanical research work in the region for the past 16 years. Tierra del Fuego is a global diversity hotspot for mosses and liverworts, which are classed as bryophytes and Dr Russell’s work on these small but ecologically important plants, contributed directly to the creation of the UNESCO “Cape Horn Biosphere Reserve” there in 2005.

During the past 13 years, Dr Russell has worked on management planning, visitor trails,  interpretation materials and guide training at the Omora Ethnobotanical Park in the Biosphere Reserve. In 2018, Dr Russell and his Chilean co-workers were successful in securing legal protection for 144,000km2 of ocean and submarine sea-mounts, in the recently proclaimed “Diego Ramirez-Drake Passage Marine Park” to the south of the Biosphere Reserve.

At the investiture ceremony, the President of the International Association of Bryologists, Dr Bernard Goffinet (University of Connecticut), listed Dr Russell’s career achievements in bryology, including his current research with Bangor University students on the sustainability of moss harvesting in Wales for the horticulture industry.

At the ceremony and at a reception held later that day aboard the Royal Research Ship ‘Discovery’ in Punta Arenas harbour, the British Ambassador to Chile, Mr Jamie Bowden, outlined the history of British exploration in southernmost South America. He noted Dr Russell’s contribution to a new book about Charles Darwins’ travels in Tierra del Fuego, and he stressed the importance of further UK-Chilean scientific cooperation, as environmental and political pressures grow in the Antarctic and Sub-Antarctic regions. 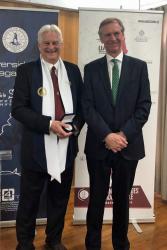 Dr Shaun Russell (left) with Her Majesty’s Ambassador to Chile, Jamie Bowden CBE, at the investiture ceremony Mr Eduardo Barros, former Governor of the Chilean Antarctic Province, noted how, from the time of Dr Russell’s first arrival in Chile, he worked to make his research relevant and accessible to local people, particularly the native American community and the staff and pupils of local schools.

Prof Andres Mansilla, Vice Rector for Research and Postgraduate Studies at UMAG, thanked Dr Russell for his many years of service as a visiting professor at the University, and his role as a founding trustee of the US$20m ‘Cape Horn Sub-Antarctic Centre’, currently being built at Puerto Williams on the Beagle Channel.

Bangor University is the first overseas institution to sign a memorandum of understanding with the new Centre, and a Bangor student has already travelled south to conduct ecological studies with her Chilean counterpart.

Dr Russell commented that the award of an honorary degree was most unexpected, and that he felt humbled and privileged to have worked with such dedicated conservation biologists and firm friends in Chile over the past two decades. He looked forward to a growing programme of collaboration between Bangor University and UMAG, as new research and training opportunities arise, following the completion of the Cape Horn Centre in 2019.